Sky Blu is an oil depot for refuelling planes taking scientists deeper into Antarctica. The site for the depot was chosen because prevailing winds, which are forced into vortices by the nearby Nunatacs (the tips of mountains protruding from the ice sheets), scour the ice of snow, creating a blue ice surface all year. Because of this the large Dash 7 aircraft can land on the ice, on wheels, with a cargo of 20 oil drums.

My intention was to make a very large drawing of the wind, using a skidoo on fresh snow. The drawing was made on a map, then re-plotted in a computer and transferred to a GPS. The GPS was taped to the handlebars of the skidoo, and once the satellites had picked up my position, all I had to do was keep the arrow on the line of the drawing on the screen, and follow it through to the end.

To make all this happen I needed a set of unlikely conditions: a fresh fall of snow, followed by a clear sunny day with no wind and no planes landing, as the skidoos would not then be available. Because Princes Anne was visiting the main Base, all flights were cancelled. There was a big blizzard with lots of snow followed by a day of fine weather, so I grabbed a skidoo, the GPS, a radio and cameras and I was in business. The line of the drawing is about 3 km long, and I had to make the big spiral smaller as I found myself getting rather close to a crevassed area. Afterwards I parked the skidoo and climbed the side of the Nunatac to take the photos. By the following day the drawing had gone with the wind. 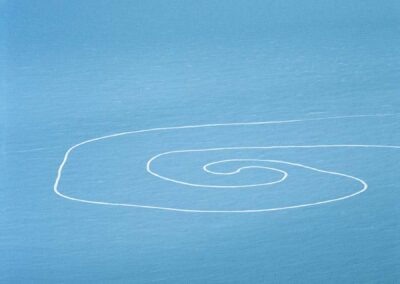 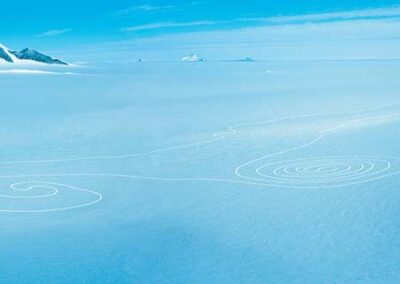