A work commissioned by the State of Western Australia for the site of the new Perth Stadium, sited on the south bank of the Swan River, overlooking the city to the west.

The wall was made by three Cornish hedgers from Roger Clemens Ltd, Cornwall: Dan Murray, Alan Wherry and Jamie Merrick. Alan worked on my Eden Project cloud chamber fourteen years ago. These three guys are world-class in their expertise. The team was completed by Billy from Nerw Zealand on the excavator. They made the wall in 3 weeks, moving 450 tons of stone. Myself with Jason and Jordan made the stone whirlpool. 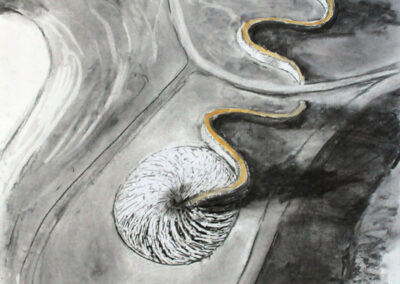 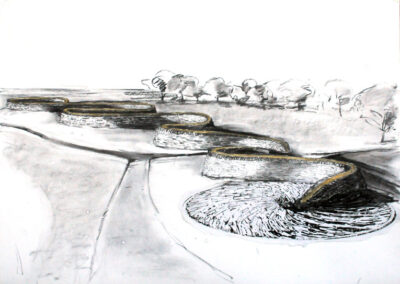 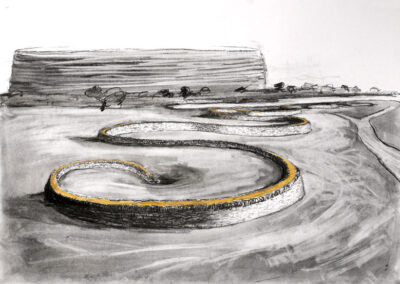 The commission had already been eight months in the preparation, with a site visit in January for discussions with the teams I would be working with: Form – the creative company overseeing the commissioning process; Hassel – the architects for the Stadium; Brookfields – the stadium builders; and Deep Green – the landscape architecture company working on the Stadium’s landscaping.

The work is a meandering dry-stone wall which emerges from a stone whirlpool on the isthmus of the lake to the south, winds its way north in a series of loops, and descends again into the earth on the higher ground. It appears to have no beginning or end, arising from the high ground in the north and plunging into the stone whirlpool to the south (or vice versa). The wall is 190 meters long and covers a distance of 90 meters as the crow flies.

This structure, however, is no ordinary wall, for it will be built as a Cornish dry-stone hedge, which is a growing, living thing: a miniature ecosystem and biodiverse habitat. In the UK some of these walls have stood for a thousand years because they are constructed with an earth infill, allowing plants to grow and give rise to habitat for insects etc, eventually binding the structure together. Here in Perth, I adapted the work to the Western Australian climate by planting the wall with indigenous drought-resistant plants, which will be irrigated

The rock structure also defines the lie of the land, seems to sculpt the land itself. It is serpentine, mirroring the river, emerging and disappearing into the land and dipping beneath a path. Being close to the river, it treats land as both solid and fluid, giving an ambiguity to the land and river-scape. The river here is a snaking movement of water; a snake moves across land or in water in a wave motion.

Within each of the five meanders, a gathering space is created – a place to sit under the shade of a tree on a seat built within the wall: a place of contemplation, a place to explore and to picnic – a place to wonder in a wandering space. This was also the ancient Whadjuk use of this shield-shaped piece of wetland, known traditionally as the Wandoolier: a river crossing place, a place to meet, a place to gather.

At the southern end, this living, writhing rock/hedge rises or descends into a whirlpool or vortex. The vortex is a manifestation of energy in the Universe and is found in the microcosm, within fluid structures in our bodies, for example, and in the macrocosm: in the movement of water in rivers and in ocean currents, in weather systems, and in the formation of galaxies. All matter arises and dies back into this energy. It is the fundamental creative aspect of the universe.

Here in the Perth area of Western Australia, the Whadjuk people have intuited this, for their Dreamtime spirit ancestor is the Waugul, the giant Serpent-being who has created the Derbal Yaragan (Swan River), and must be acknowledged by all peoples living on these river lands. The Swan River was once a prehistoric serpentine canyon, and you can see the scale of it from Google Earth, where the ancient canyon is clearly visible beneath the sea. The power of this image and its connection to the Waugul is tangible. My role as an artist is to connect nature and cultures – here I can only just touch on what I perceive to be something very deep and beyond my comprehension. I don’t want to appropriate this powerful story, only to make a connection to it.

Within 18 months when the Stadium opens the area around the work will be grassed and trees planted. Paths will run through and around it and the wider landscape will be planted with shrubs and the work lit at night. 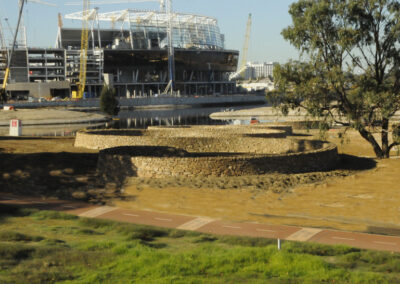 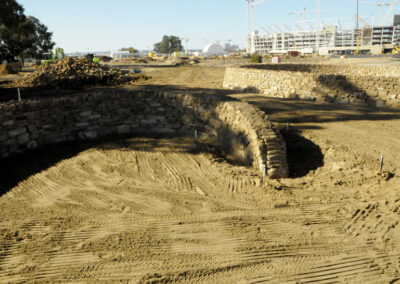 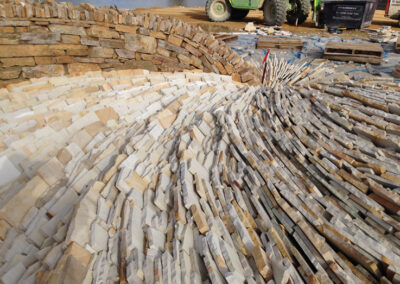 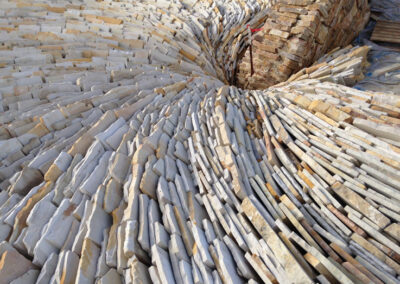 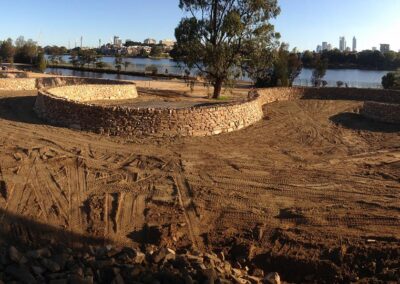 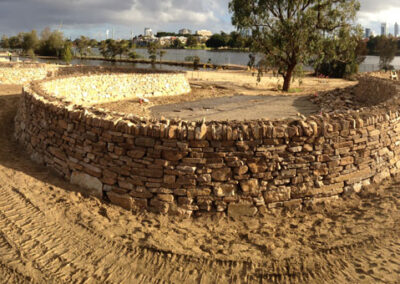 OCTOBER 2017 UPDATE
The work has been under wraps all this time, yesterday these were removed and it looks from the photos taken that all the plants are growing well and now that the landscaping and trees are in, the work is well bedded in. 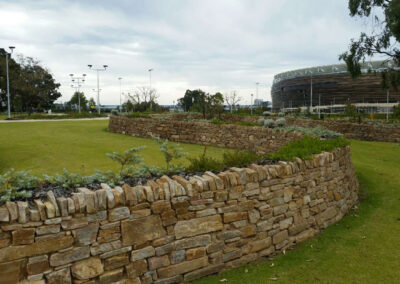 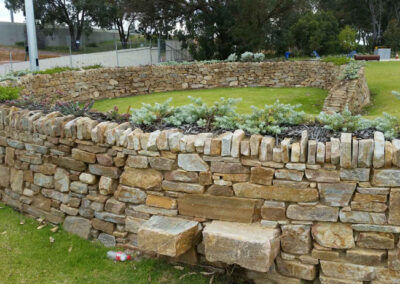 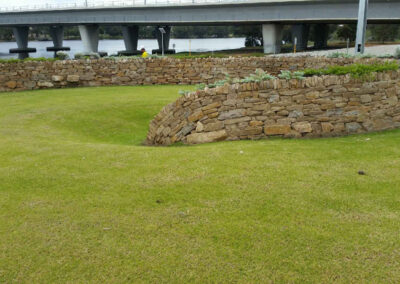