The Energy of a Stone Row

The Energy of a Stone Row, Les Jardins Des Arts, Chateaubourg, Brittany, France
This is a garden connected to the hotel Ar Millin with the La Villaine river running along its border. Gisele Burel has been running this annual sculpture exhibition in the garden of their hotel for 20 years. This was her last year as president and she chose to invite land artists, some international and some local. My brief was to use materials which were present in the garden. I know Brittany very well and have always been fascinated by the stone rows of Carnac, which seem to me to be like an acupuncture line of the Earth. In both the body and on the Earth these lines represent energy. All energy is born of and dies back into energy, which is manifested as the spiral or vortex. You can see such vortices in rivers, clouds, within the human body and in the formation of galaxies – in the microcosm and the macrocosm.

The materials to hand in the garden were a large pile of granite stone which had come out of an old castle and which remained after the building of the hotel by Jaques Burel’s father; so they have a history. After the storms of the winter many trees had come down close to the site I chose, so these were cut and split and I used these new logs as the way to draw the flow of energy around the 7 upright stones and into the vortex, charring them black as they went down into the earth. Carbon here is stored in the earth, not released to the atmosphere. The stones were placed first with a JCB, the turf then cut out and the logs laid, starting in the centre of the vortex, charring the logs in a fire bowl close by. 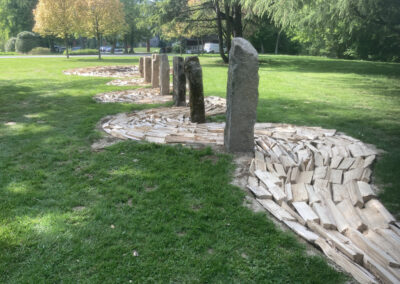 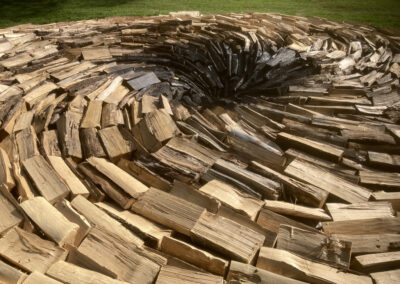 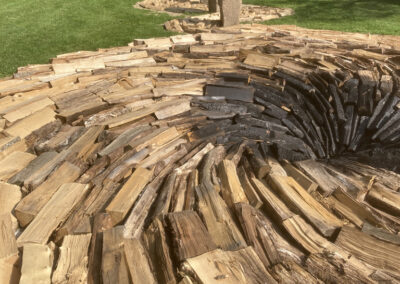