The Birth of Energy

The Birth of Energy is the third in the trilogy of works by myself, commissioned by the Siemers Stiftung at Neddernhof, South of Hamburg in Germany. It is constructed out of 30 tones of white/grey sandstone laid in a whirlpool pattern within an 18 m. diameter circle, with 15 glacial boulders spiraling into the circle and out again and with a 28 m. circle of 7 trees: 5 oaks and two pines, planted around the inner whirlpool. The site is perhaps the highest point at Neddernhof, close to the entrance of the property, the land drops away from it to the Schmokbachtal, a small stream that arises close to the road, runs through the land East to West, forming 5 lakes on its way before it joins the river Este to the West of the property. The first boulder in the work points towards the entrance to Neddernhof, while the last boulders links in a site line to the next work – Equinox (commissioned in 2008), which is two thirds of the way down the land. Widendomes, the first work commissioned in 2002 is situated close to where the Schmokbachtal joins the Este. 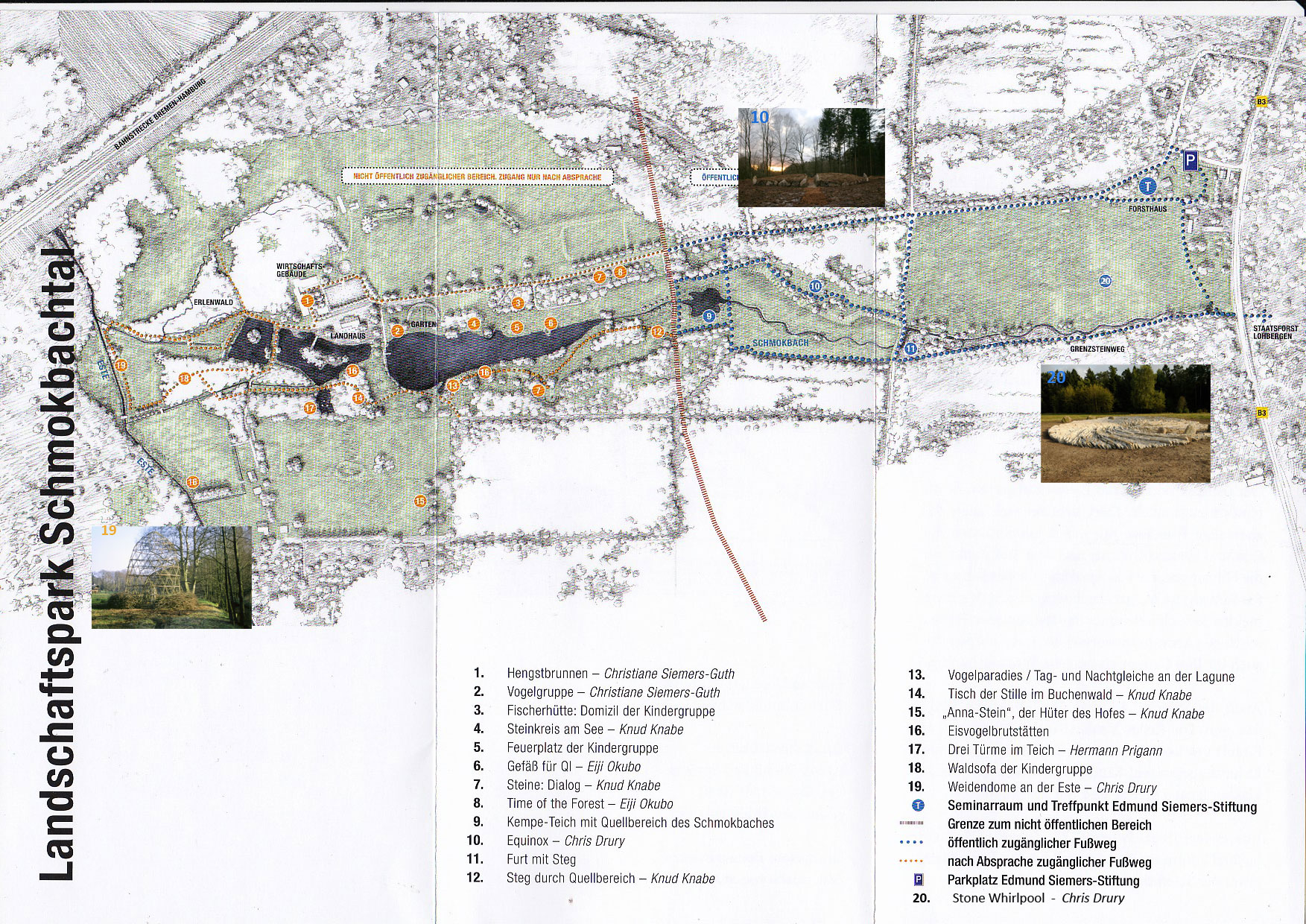 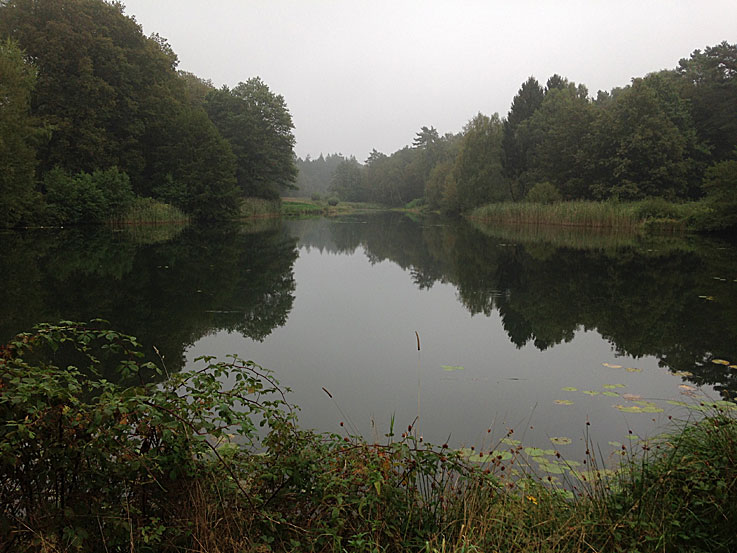 The vision for this beautiful piece of land, with its forest, trees, heath land, fields, lakes and river was the work of Hans Edmund Siemers who purchased the house and land in the 1970′s adding more land over the years. Hans Edmund was an architect who helped rebuild Hamburg after the war. A remarkable man with a very clear vision. The land was conceived as an Art/Nature park, where art is not placed in nature, but rather the art and the nature are interwoven so that one inhabits the other in a co-dependent relationship.

With each work which has been placed here, and there are many, there is a watching and waiting to see how things develop and an adjustment both to the works and to the nature as the years go by. These then are not objects; they are an ongoing process where the next generation in the family have to take on that responsibility of stewardship. As well as the art and the park there are also the Icelandic ponies which roam the fields and which Hans Edmund had a passion for; a passion shared by his daughter Anna Siemers who manages and breeds them today.

Hans Edmund died in 2010, aged 89, but his vision lives on and he always wanted another land work at the Eastern end of the park, so it was his widow, Gabriele Siemers von Loper who invited me to return and complete the vision. The Stiftung, which is the trust set up to manage the land, commissioned the work.

My instinct for this piece was to make something which generated a quiet and robust energy at the start of the Schmokbachtal Art and Nature park. I wanted to use a whirlpool as this is what indicates pure energy in the Universe and can be found in the microcosm – say as blood flow in the heart, or in the macrocosm as whirlpools, whirlwinds, weather systems and the formation of galaxies. To mediate the energy of this big stone vortex, I proposed putting it within a circle of trees, which would draw the visitor across the field to the site where this whirling energy would be revealed. The cover of the trees would give it a sense of mystery too. Spiralling and drawing the visitor into the trees, would be a line of boulders which would be partially embedded in the whirlpool, and would then spiral out again and lead the visitor towards the big standing stone at the edge of the next piece: Equinox. So in the three works at the park you start with a spiral/vortex energy which moves on through the Equinox in a line of power and direction, through to the Widendomes at the end where the energy moves into infinity with the figure 8.

The initial idea was proposed in 2013 and constructed in September 2014. Knud Knabe and Gabriele, chose the sandstone from a stone yard near Hanover and we tried to estimate how much we would need. Knud also selected the 15 glacial boulders from a farm close by and all of this was brought to the site and a circle excavated on the spot which we had marked out the previous year. I have worked with Knud on all three sculptures and he is a genius at selecting and placing stones. There are five of his own works in the park.

It was decided that the site would not be fenced off from the horses, rather that they would be kept out of the field until the work was well established. Icelandic horses are always very suspicious of recently moved boulders. We also brought in a Landscape Architect from Hamburg, to advise us on trees and planting. These were eventually purchased from the world-renowned company Lorenz Von Ehren, 20 minutes drive away. When I arrived the family had seconded two Polish workers, Martin and Arek to help me make the work. They turned out to absolutely brilliant and worked to the punishing schedule of 7.00 am to 7.00 pm! The work was made in 8 days, and the trees will be planted in late October. In 40 years it will begin to look like the drawing. 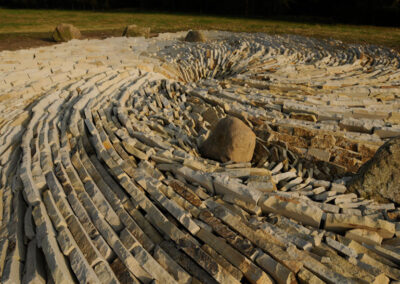 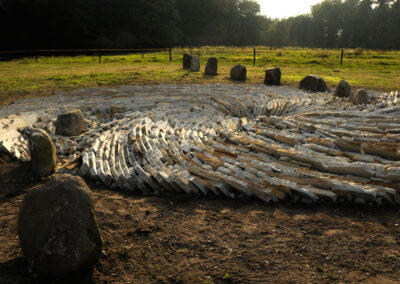 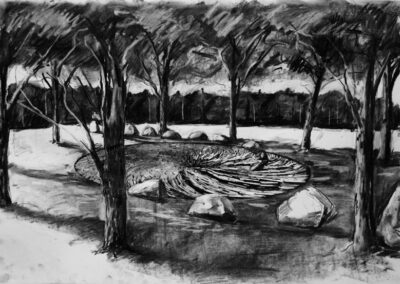 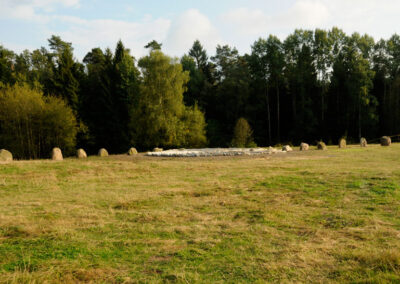 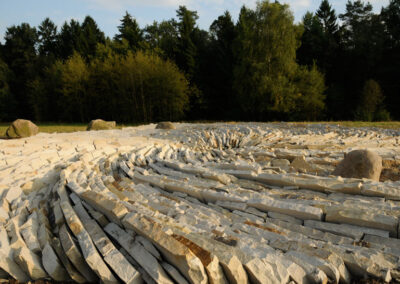 This was my first work made here in 2002. I was recommended to the family by my late friend Herman Prigann, who I first met at Arte Sella in Italy in 1994. The idea was based on a figure 8 around a standing and sitting stone, and was sited at the far end of the Western boundary of the land close to the river Este and in a rather waterlogged field. The boulders were chosen and placed by Knud Knabe in January during a hard frost and I came in March to weave the two domes over the stones. We got very long (4 m.) recently cut willow sticks from a nearby growers and pushed these into the ground as crossed uprights in the figure 8 plan. The horizontal weaves were from sticks which would die, but the uprights would grow. I gave instructions for the new growth on the smaller dome to be woven in, and on the tall dome, to be pruned on the lower sections.

As a result the smaller dome grew very dense and dark and tangled, while with the tall dome, the strength of the growth went into the stems and this dome has really become strong and healthy. As a result we are now pruning the smaller one to strengthen up the stems. In many places where the uprights cross, the two trees have fused together and in time it is hoped the whole figure 8 will be one tree. The work has to be tended every year and the question asked, ” What does this work need now? Where is it going?” A few years ago it was felt that the South West area of it was not getting enough light so neighbouring birch trees were cut down. Over the last 10 years this piece has gone from a very geometric and architectural shape to something which is much more organic and unpredictable. 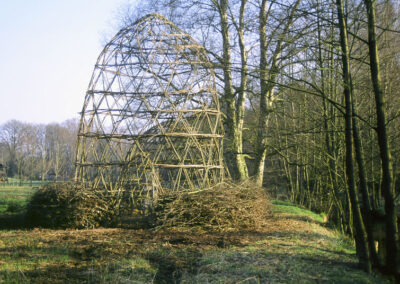 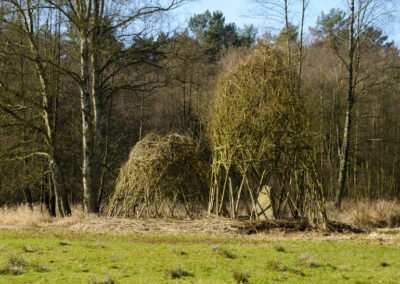 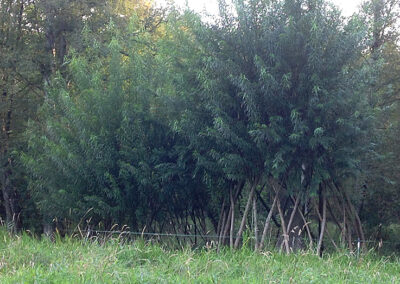 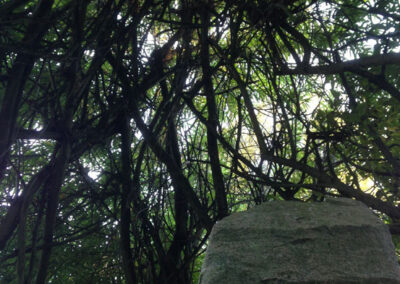 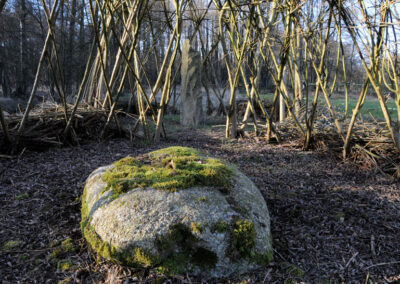 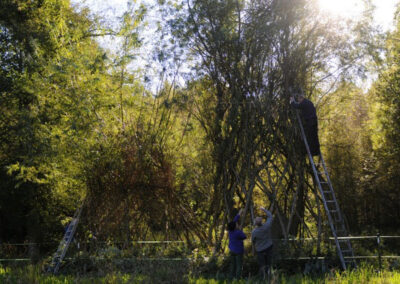 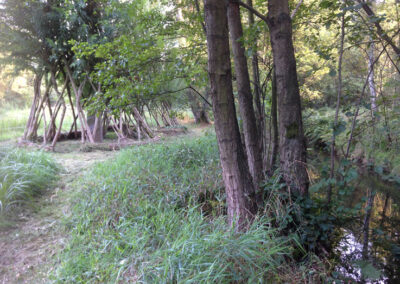 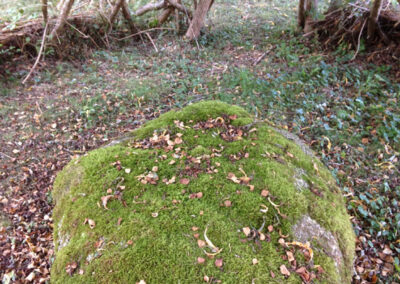 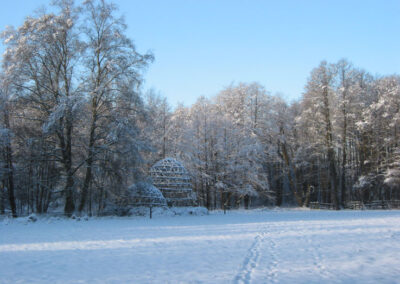 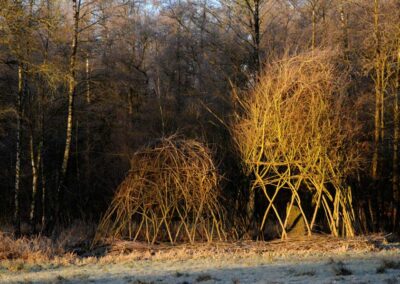 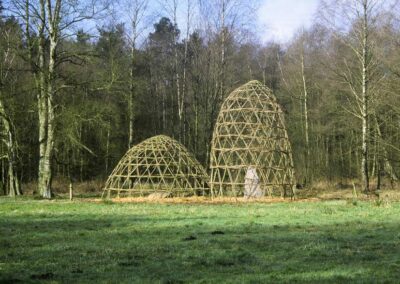 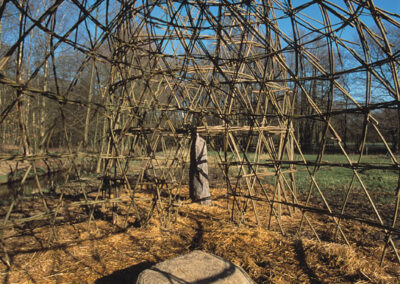 In 2007 Hans Edmund asked me to return to Neddernhof to make another proposal for the park. He indicated that he was interested in the area around the most Easterly lake, which he had recently excavated from its original rectangular tank-like shape to something more organic. Every time I come to Neddernhof it is either in the spring or autumn and my visit on this occasion was in the autumn. I noticed that the high ground close to this lake was very beautiful and was clad in tall pines. It has a site line running East West towards the house connecting through to the Eastern entrance. The site line was partially obscured by the trees. East West is where the sun rises and sets at the equinoxes. Hans Edmund was born around the spring equinox, so I felt there was a connection here.

In this area of Germany and in neighbouring Denmark there are many historic long barrows and chambered tombs made with glacial boulders. I had a hunch that an oval mound, cut in two by an East West path and sited along the East West axis by two big standing stones would draw the walker towards the house and lakes and at the same time mark the Equinoxes and Hans’ birthday. I suggested to Hans that we might need to cut down a few trees to achieve the site line. He enthusiastically agreed and said that he had long wanted to do this to let more light into the area so that it would revert to heath vegetation and increase the biodiversity. When I returned the following year to make the work, I was quite shocked that he had taken down a whole swathe of trees. But in fact his hunch was right and all sorts of heath-land plants have established themselves and the place has the feeling of great lightness.

My initial idea was to have quite a high mound with a 2 m. stone lined cut through it, but that height was thought to be too dangerous for children and we reduced it by half. Six years on it is amazing to see how this piece has become integrated into the landscape, how it is much used by the local community and how even horse riders gallop through the gap. 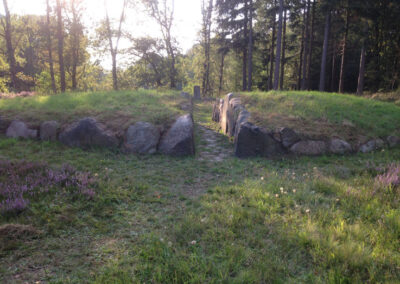 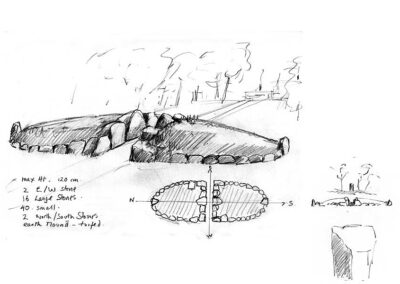 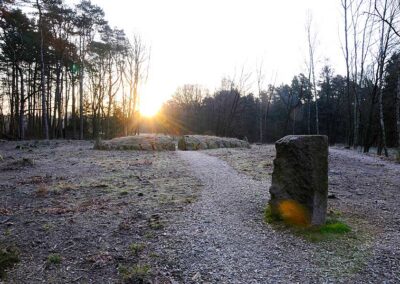 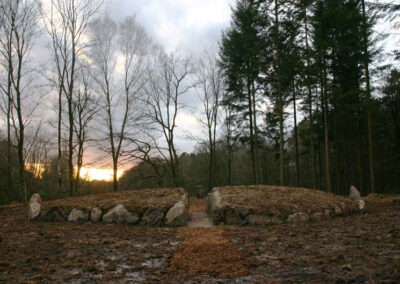 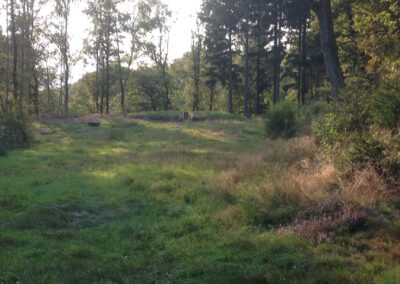 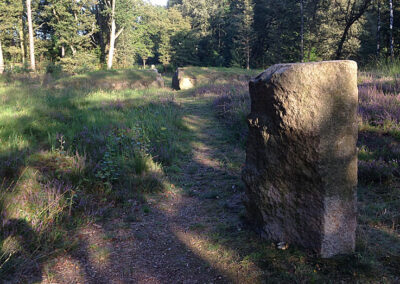